I was speaking with my wife in Illinois this afternoon, I’ve been in Las Vegas for about a week, she mentioned that when she was in Emack & Bolio’s today someone asked if I was o.k.?  They hadn’t seen any blogs lately and they thought I might have passed on to the great beyond.

When I looked I did have two blog posts in April; however, none so far in May.  Thought I should sit right down and draft a new issue about my journey. 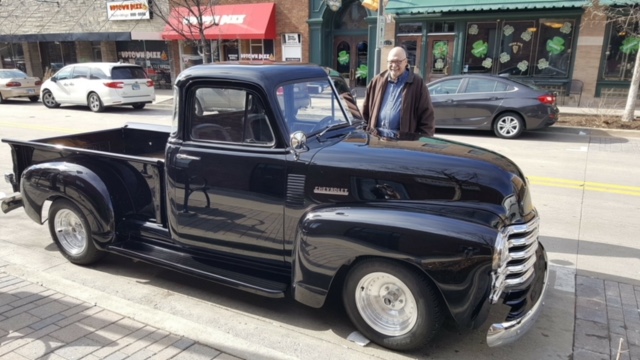 Just before I left I was happy to get a couple of up close seats to see John Prine in Indianapolis.  If you know me at all you know my 28 hour trip playlist had copious amounts of John Prine, Neil Young, Willie Nelson (Woke up this morning still not dead reference) and The Eagles tunes.

I decided to cruise my old truck, same age as me born in 1951, from Normal, Illinois to our home in Las Vegas, Nevada.  For several reasons I chose to drive solo, most specifically that I wanted to drive on 2-lane highways as much as possible for this journey, the actual ride is not as smooth as most would want and I was traveling with no schedule of arrival or travel time.  Some of the journey was on interstate; however, I attempted to cruise on old highways which included US route 24, Colorado route 91 and the old Santa Fe trail.

When I got into  Limon, Colorado the weather forecast called for golf ball sized hail on both sides of the Vail Pass.  This caused me to drive south on Colorado route 91 in a heavy fog and while my old truck was running great, but my remedial windshield wiper crapped out.  A massive amount of rain-x would work in rain, not so much in fog.  I ended up having to clear part of the windshield with a polishing cloth.  (The moisture on the flat windshield did clear off with the passing of semi-trucks!)  As I rolled down the road the fog started to lift after around 80 miles.   The weather was perfect as I approached Trinidad, Colorado on the Santa Fe trail.  From Trinidad I crossed into New Mexico.

It was a beautiful drive and I made it a point to only stop and eat in small towns at local cafes.  The 51 Chevy was a great conversation starter and made quite a few acquaintances along the way.

Health-wise it looks like the Keytruda treatment my be reducing the tumors in my lungs.  The initial site of this stage 4 cancer was in my bladder, unfortunately these tumors are growing; however, my urologist in Las Vegas had determined he can remove most of them surgically later this week.  Other than that I’m feeling great, my attitude is, and has been, that every morning I wake up is a great day!  Feeling like I’m 40 again, not bad for a 66 year old guy.

I’m picking momma up at the airport Memorial day so it should be a great holiday.

One last thought, it is not how much you have, it’s how much you give.   Because when you get to the pearly gates you can’t take anything with you.  The feeling of giving someone something is much better than receiving anything.

2 thoughts on “Woke up this morning, still not dead!”