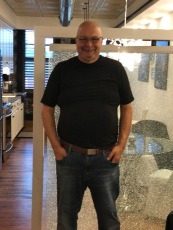 While waiting for my third body scan in early November I decided to get a thorough eye exam concerning some cataracts yesterday.   The good news was that I might consider a procedure that would allow me to toss away my tri-focal glasses!  All that was required was a standard dilation test and a few other checkups.

During the checkup the doctor noticed an irregularity in my corneas, very minor;  however, he wanted a few more tests.   I wasn’t certain; however, I thought the doctor might check with my researcher team in Texas to determine if this might be a side-effect of the experimental medication I was taking.

Today I got a call from MD Anderson and I was told to discontinue taking any of the daily mediations until my scan in early November.  The short story, they have experienced this eye issue, with the cornea, with the participants on this particular trial.

Holy Crap!  This medication has been shrinking my tumors and I’ve been feeling pretty good lately.  I was concerned about what might happen if I stopped taking the drug.  After making another call to Texas I was told that since I had caught this “side-effect” early they would likely have a fix during my next visit for a scan.  They also told me nearly everyone who experienced this issue was still on the medication.

Funny, that at this point I’m not extremely concerned with a few side-effects, after all my Los Angeles doctors had predicted I would now be dead by now.  My attitude has, and still is, that everything is good until it isn’t.

So now it’s time for a little renewal of faith on my part.  Hopefully, all will be well after my next visit to MD Anderson and I will then have a minor eye surgery that can restore my eyes to the vision of my youth.

A few side-effects in exchange for dodging the big C.  Not a bad deal so far.

Time to enjoy the best weather of the year in Las Vegas, mid-eighties with no wind to speak of.  Thinking about Barrett-Jackson Auto Auction at Mandalay Bay, starts tommorow, but alas no garage space left.  Time to just look and try not to buy!

4 thoughts on “Now Experimental Side Effects”